I did it! But I was beginning to wonder …. I realise marathons play havoc with your head!

Having been dead laid back about this for weeks the nerves kicked in when I got off the train in Manchester on Saturday. This was probably why I wasn’t paying attention to where I was going and slipped off a very high kerb and jolted my back. It hurt! I spent the rest of the day worrying that I’d wake up in the morning unable to move.

The airbnb was OK and a lovely little Italian restaurant (just three tables) round the corner, so carb loading was sorted.

I think I managed about 2 hours sleep. I couldn’t stop thinking about the following day, testing the back out etc, etc. It was up at 6.30, porridge and off at 7.30 to meet Paul at a Travelodge not far from the start. This was almost an absolute nightmare. The phone hadn’t charged over night and I had about 15%. I was using the satnav to find the way but what started as 35 minutes kept going up, not down. I was in an industrial area somewhere or other, nobody around and the phone died! I saw someone and asked them where Salford Quays was. He looked at me and said ‘it’s miles away!’ It was now approaching 7.45 and I’m getting a little concerned.

But eventually a taxi driver came to the rescue. He wasn’t a fan of the marathon. The air was blue as he told me how it would affect his trade that day, but he got me to the Travelodge in time and it was a short walk to the start with Paul and his buddy – who was a 300 marathon runner, just a few ahead of Paul.

Queuing up in my wave was such an exciting feeling and when we finally passed the start line I gave myself a good talking to and set off.

The first 10 miles were on schedule, sub 10mm each one. My legs were feeling really heavy but no sign of any injuries. Then at mile 11, my IT band on the right knee started to hurt. This got worse and worse and by mile 13 or 14 I had to start a ‘walk/run’ strategy. The pace suffered as a result and I even hit 14mm at mile 19.

But at around mile 17 a wonderful, wonderful woman came to my rescue. She could see I was in bother and gave me an ibuprofen tablet. By mile 20 I was able to put in some good sprints, before having to stop again when the pain was too much.

The benefit of the occasional walks was I didn’t suffer the wall at all and I knew I’d be able to run to the line rather than hobbling over on my last legs. And this I did in 4 hours 38 minutes.

The support I received from spectators and other runners was unbelievable. This sport really brings out the very best in people. There are so many I’d like to go back to and give them a big hug.

I was a bit disappointed with the time to be honest. It was about 20 minutes slower than I’d hoped for and I knew I had it in me to go faster, but the knee wouldn’t play ball. Still, the good thing about a slow time is I’ll have something to beat on the next one.

Thanks for spending your Sunday supporting your old dad Anna, and Tom too! I missed my brother looking out for me in Altrincham. I’m absolutely hopeless at noticing people when I’m running, and there were so many runners I know he would have found it a challenge spotting me.

Ooops! I’ve missed a couple of days, probably due to the fact that I’ve not run since Tuesday.

Wednesday morning it was back to the physio, who treated me to/with some more acupuncture. Both hips this time as I’d had a little niggle on the Tuesday run. This plus some massaging and instructions to stretch and continue with the pigeon pose, crab and monster walks. For the latter two I’ve bought myself a resistance band. He’s told me to activate those glutes before the run so it should come in handy.

Having said that, I don’t seem to be able to activate the actual butt muscles, just the ones on the side whatever they are. Too much sitting around on a laptop, no doubt. Last night I woke up with cramp in my calf and I can still feel it a bit today. This is a new niggle and I’ll be icing it, stretching it and anything else Google recommends before Sunday.

No Thursday run, which considering the weather was probably just as well.

So, two days to go! I’m off to Manchester tomorrow morning so this will probably be the last post until after the run.  I’ve felt so excited about this challenge for weeks – I really am looking forward to this. Not that I’ll need a pep talk but I might pop along to the Manchester Eve Meet Up in the evening to get the adrenalin flowing.

I was planning to run this Thursday and so just regarded tonight as one more run before the marathon. But a few people were surprised to see me there this evening and I decided to listen to their advice. It’s rest, stretching, sleep and no more runs – though I might slip a few sneaky short ones in in the mornings.

Tonight’s run was really nice. A gentle 10.00mm pace with Heidi. Allens Croft wasn’t too bad at all and I got round without any worrying niggles.

A visit to the physio tomorrow; it was a surprise acupuncture session last week. I wonder what he has in store for me next?

What a great weekend this has been:

4. And best of all – Anna surprised me with the news she’ll be going up to Manchester on Sunday to shout me across the line! I’m a very happy dad!

Could the weekend get any better? Oh yes, Line of Duty tonight at 9.00! Just praying that  Hastings doesn’t turn out to be ‘H’. 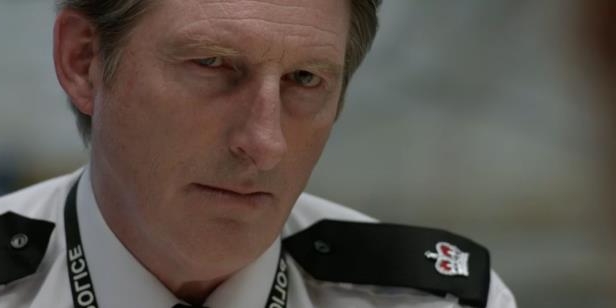 I had my first taste of acupuncture treatment when I went to see the physio on Wednesday, Phil’s next stage of sorting out my hip pain. It was a bit sore this morning when I took the dog out for a walk but was almost non-existent by the afternoon and there were no signs of any hip issues during the run this evening.

So that’s three runs on the trot without any niggles with just four more to go. A lovely weekend ahead with Grace running her 50th parkrun and Kate her 100th – a double excuse for cake. And then on Sunday a few people are running with me to wish me well for Manchester – and more cake!

A gentle, slow pace was the intention tonight. I had a short run before we started and then 4 miles on the Feck Hill route. I ran with Grace and Afshin and ended up doing sub 9.00 for a couple of miles and 9.13mm overall. This was a lot faster than I’was planning but no niggles and I enjoyed the chance to stretch my legs.

So 5 more runs before Manchester and I’m feeling really positive having had no hip or knee pains for the past two runs. I wonder if this has anything to do with the stretches I’m doing? I’m being pretty good with the exercises the physio gave me last week and I’m looking forward to seeing him again first thing tomorrow.

Both girls were up and atom this morning for our trip to Coventry and despite a bit of travel sickness for one of them, we arrived well in time for kick off.

It was great to see several KHRC runners during the warm up and for the first time in weeks I was able to start a long run with friends rather than on my own and ran with Sean from start to finish. It was a bit hilly in places but a really pleasant route, made all the more pleasant by taking it easy and no heroics. We came home in a few seconds over 2.00 hours, and with no pains or niggles, I was really pleased with the result.

I love having these two cheering me in at the finishing line. A pity they can’t make Manchester. 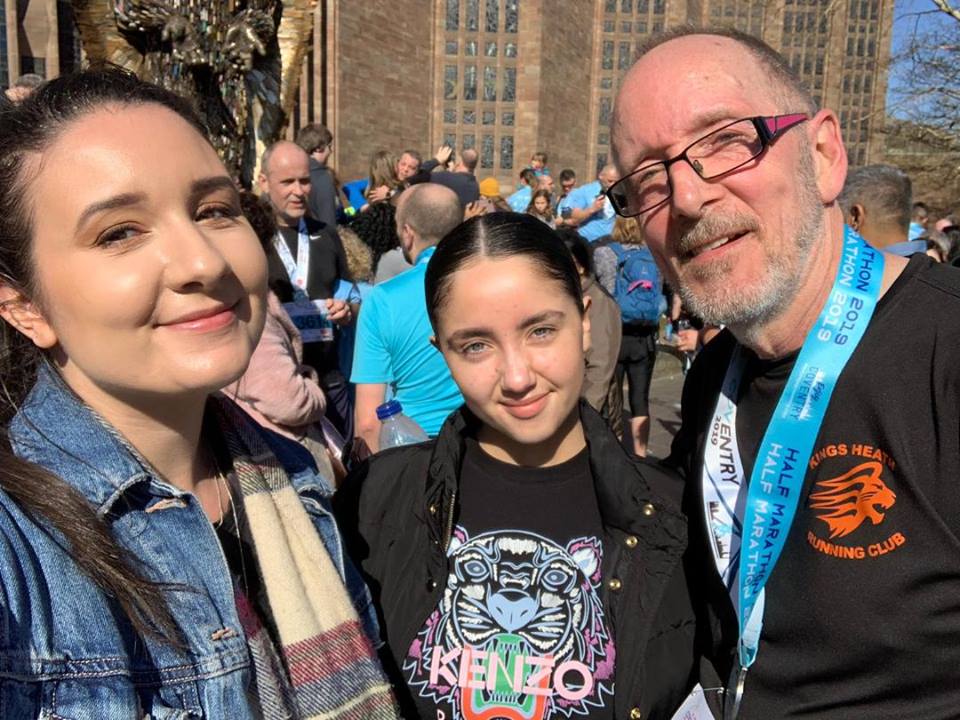 I managed a photo with a few of the KHRC contingent at the end – look at that beautiful blue sky! 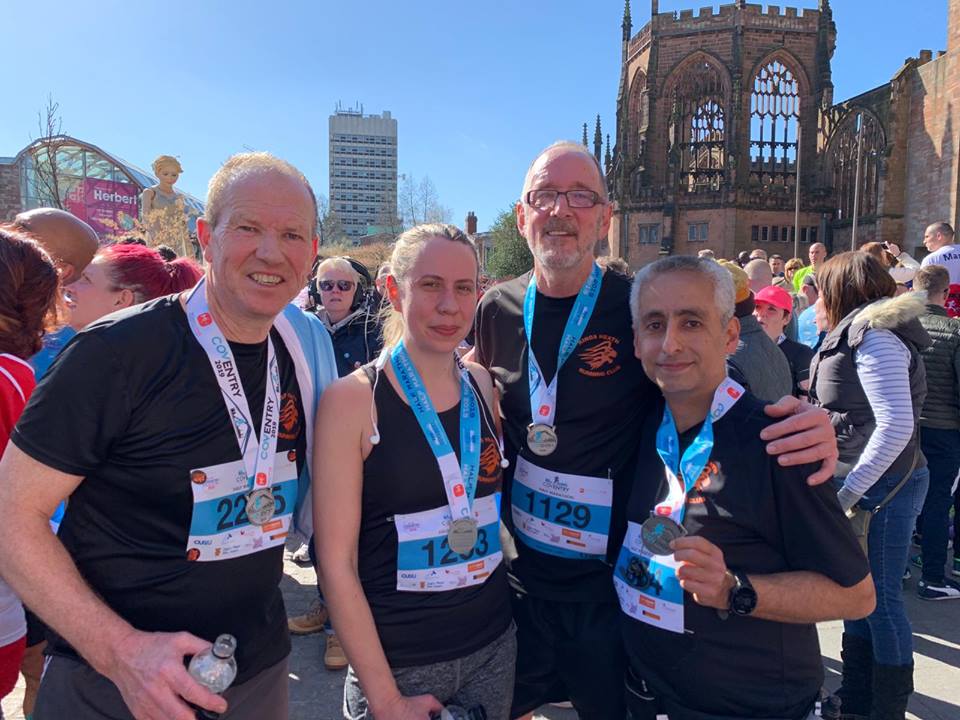 So that’s the long ones done and dusted. Two weeks of shortish runs at a steady pace, lots of stretching and core strength exercises and hopefully I’ll be good to go.

Another Cannon Hill parkrun  with Anna this morning. She took me up on my offer to pace for her and with the Coventry Half tomorrow, I was happy to have an excuse to take things easy.

It was a great atmosphere with the KHRC C25k people attending their first parkrun and loads of support from the club. Me and Anna set off with 12mm planned. This would get her round in 37 and a bit minutes. Once again she was a real trooper and stayed with me all the way round, even managing a sprint up the hill at the end. 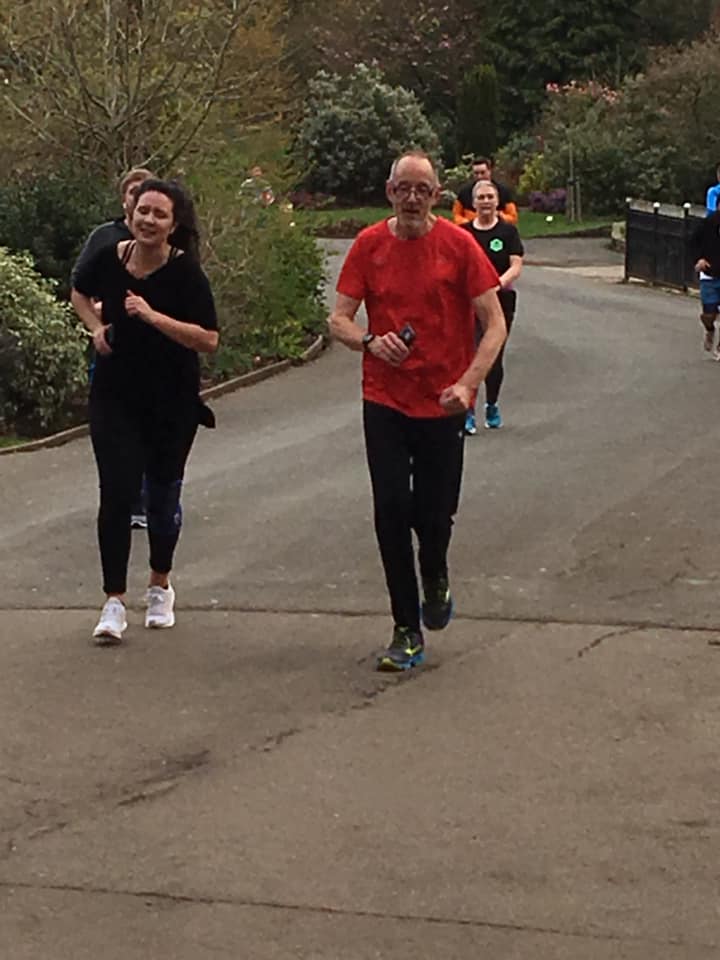 I’ve been loading up on the carbs this afternoon and it’s an early night for me and the girls and up at 6.00 for Coventry in the morning.

Well, that was fun! I volunteered to join the C25k (Couch to 5k) group last night on their last run before their very first parkrun on Saturday. This group of novice runners have been meeting for the past 8 weeks (I think) and gradually building up their distance to the point that last night they ran for 30 minutes. I ran with one person who managed an amazing 13mm pace and without stopping for a breather once. Well done!

The group will now meet up on Saturday at Cannon Hill to run their first 5k! Apart from the fantastic organisation of the C25k programme led by Lee, KHRC will also be organising a running buddy for each of the group members to help them complete the parkrun. It’s really wonderful to see two fantastic community initiatives coming together like this, without a penny changing hands and all thanks to the kindness of volunteers.

Another thing I’d never heard of that I apparently suffer from: ‘knee valgus’. I went to a sports physio yesterday and he quickly identified that my knees tend to collapse inwards when I squat on one leg – a result of weak glutes and other hip muscles, the names of which I can’t remember. He sorted me out with some stretches and exercises, which I intend to do on a daily basis. I’m pleased I’ve identified the cause of my hip pain and according to the physio, this can all be remedied with a bit of hard work.

And two days after the Notts20 I managed a gentle 4 mile club run tonight without any significant issues and a nice chat with running buddies as well.